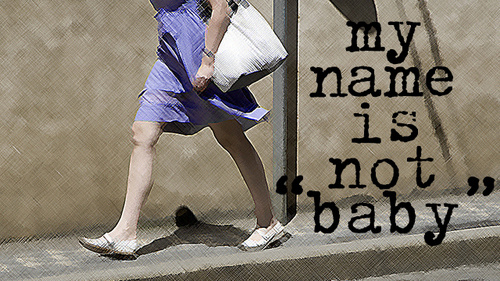 I want to spread the word about Hollaback London, a movement dedicated to ending street harassment, and talk about reacting to a wolf-whistle, a ‘hey mama’ or a grope in a public space.

When I’ve discussed street harassment with female friends, every one of them has experienced it to some degree. Be it someone grabbing your hand, touching you in an inappropriate place, making an obscene gesture, it surrounds us all the time. A YouGov survey of 1,047 Londoners commissioned by End Violence Against Women Coalition (Evaw) found that 43% of women aged between 18 and 34 had experienced sexual harassment in public spaces in the last year – that’s a lot of women – I wonder how many of them confronted their harasser?

There’s been so little research into the impact of these cat calls or stares that it’s really hard to pinpoint the emotional and psychological effects over a long period of time. To be sporadically objectified in a public place doesn’t make me feel great – just angry and powerless. I mean, what exactly can you do when someone grabs you or calls you ‘sexy legs’ in the street? Can you turn around, if you’re alone, and ask them politely why they said that, or why they grabbed you?

====  Check out ‘Femme de a Rue’, a documentary made by Belgian film student Sofie Peeters, which shows how she is openly sexually harassed by men on the streets of Brussels. Peeters’ film has had wide ramifications in Belgium, with some politicians promising more legislation against street harassment of women — femme-de-la-rue-sexism-brussels-video?intcmp=239 ====

It’s been so prevalent on British streets for so long (when I was 13 I was scared to pass a building site) that it’s become normalised, and some of my female friends will talk about it feeling like a compliment.

I personally hate feeling so powerless and, as I would do with any man being openly sexist in conversation, I aim to challenge any man who harasses me by wolf-whistling, grabbing or muttering in the street, or indoors for that matter, from now on (only if i’m in a safe location). I’d quite like to ask the question ‘why?’ a little more. I think spreading the message, making sure that the aggressor knows it’s not right, is a logical thing to do and hopefully will influence their behaviour in the future.

Do you confront people, or struggle with street harassment? Check out Hollaback, and work with them to challenge street harassment in a safe place. Here are some other international groups/organisations that might help too: